When I was first confronted with the terror of the incurable disease, I was for the first time convinced of my doom, and that conviction enabled my hands to reach life at the deepest level.
-- Fumiko Nakajo

By expressing what lay at the basis of her life, she turned tanka into a weapon against the terror of death. For Fumiko, who believed in no religion, tanka was her light and her salvation.
-- Makoto Ueda

In celebration of  Tanka Poetry Month, I am pleased to introduce you to Breasts of Snow -- Fumiko Nakajo: Her Tanka and Her Life, published by The Japan Times and written by NeverEnding Story contributor Jane Reichhold with Hatsue Kawamura (available from AHA Books). 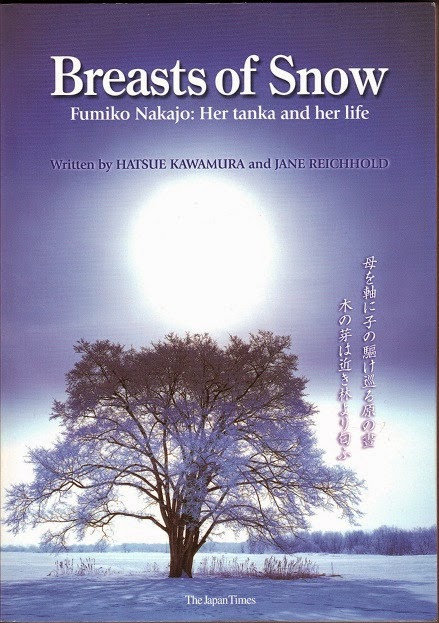 On this beautifully-designed cover is a tanka in Japanese:

Breasts of Snow is the story and tanka of one of the best tanka poets, Fumiko Nakajo (1922-54), who is, though almost unknown outside of Japan, considered to be the third in the three most famous Japanese female poets in the last century, right up there with Akiko Yosano and Machi Tawara. Fumiko Nakajo was a strong-willed woman who lived a tragic life. She died from breast cancer at the age of 32, just few months after her first collection of 50 tanka, titled Chibusa Soshitsu (The Loss of Breasts), won the first prize in a nationwide contest sponsored by a major magazine. Writing from "the depths of her despair, buoyed by a sense of hope," Fumiko poignantly expressed in the tanka her love and desperate struggle with death as a single mother of three.  She distilled all of her thoughts and feelings into this traditional Japanese fixed verse form, whose syllabic confinement, as Makoto Ueda rightly emphasizes in the preface to Modern Japanese Tanka: An Anthology, "matched the confined life she was living in a cancer ward" (xxxii).

Breasts of Snow  includes major tanka from Fumiko Nakajo’s two collections, Chibusa Soshitsu, mentioned above, and Hana no Genkei (A Prototype of Flowers), published posthumously in 1955. Each page contains one tanka in Japanese and in English, along with the joshi (prefatory note) as an explication and the detailed biological background.

When I faced the fear of cancer, which is said to be irremediable, I was able for the first time to rise from my conviction of unhappiness and reach for the deepest layer of my life.

The following is another example taken from one of her most famous tanka:

As one year ends and the new one begins, with fireworks in the night sky, Fumiko, in the arms of her lover, thinks of her recent operation to have a breast removed and her joy in her coming marriage.

(Jane Reichhold's comment: The first line oto takaku, (oto - sound, and takaku – high in the sky), has a double meaning; the sound of fireworks is very loud and that the fireworks open high up in the sky. This poem contains the only sexual scene in her tanka collection. The verb ubawarete – "taken" can mean a woman's body is "taken" by a man's so that she is taken in passion or as "possessed" as in almost crazy. In addition, the loss of her breast means that a part of her body has been taken away from her which adds greatly to ephemeral aspect of fireworks. The fireworks symbolize her fleeting, transient and ephemeral happiness, since she now knows she is fated to die soon")

As  Donald Richie emphasized in his review article, titled "Whispers as loud as shouts," Fumiko Nakajo’s short life was both illustrated and illuminated by the tanka that she began writing seriously after she developed the cancer that eventually killed her. The best way to know the story and tanka of one of  the best tanka poets is to read her beautifully-crafted heartfelt tanka.

far in the sky
is there happiness?
what is it like?
even an ad balloon
pulls on a rope

for insomnia
the night prepares to give
me something
a toad, a black dog
one who has drowned

Note: Before the publication of Breasts of Snow, the only English translations of Fumiko Nakajo's works (20 tanka in total) can be found in Modern Japanese Tanka: An Anthology, edited and translated by Makoto Ueda (pp. 205-216). Below are three tanka about her heart-wrenching struggle with breast cancer:

that hill
shaped like the breast
I have lost
will be adorned with
dead flowers in winter
Posted by Chen-ou Liu, 劉鎮歐 at 10:27 AM