In celebration of International Women's Day, I am pleased to introduce you to Chrysanthemum Love by NeverEnding Story contributor, Fay Aoyagi. Her first collection of haiku was "like a breath of fresh air, mingling wafts of old and modern Japan among the zephyrs of Northern California."  William J. Higginson wrote an insightful review of her book, The Real Thing, which was published in Modern Haiku, 35:2, Summer 2004. 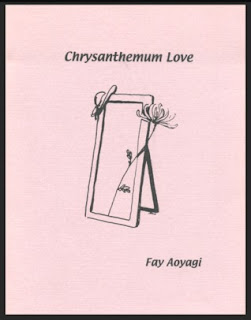 Fay Aoyagi （青柳飛）was born in Tokyo and immigrated to the U.S. in 1982. She is currently a member of Haiku Society of America and Haiku Poets of Northern California. She serves as an associate editor of The Heron's Nest.  She also writes in Japanese and belongs to two Japanese haiku groups; Ten'I (天為) and "Aki"（秋), and  she is a member of Haijin Kyokai (俳人協会).

I write very subjectively. ... I love the shortness and evocativeness of haiku.

I don’t write haiku to report the weather. I write to tell my stories.

red camellias --
the assurance
of my breasts

dinner for two
between our silence
the oyster shells

Independence Day --
I let him touch
a little bit of me

morning chill --
the Stars and Stripes
on his breast pocket

migrating birds --
the weight
of my first voters' guide

lopsided moon
I count the syllables
in "patriotism"

moonlit sunflowers
at a 24-hour deli
his "good night" lingers

this soap bubble
I control the world
for just a second