A Room of My Own: Coronavirus Poetry Diary: Laughing in the Face of Adversity

written on the day of the WHO announcement: Covid-19 outbreak is a pandemic

coronavirus alert
this urge to touch the face
of  my shadow

Third Entry: written in response to the anti-racist message (" I am not a virus, I am a human being") conveyed in a viral youtube video posted by Massimiliano Martigli Jiang

Fourth Entry: for my favorite Italian novelist, Italo Calvino, author of If on a winter's night a traveler

the world smaller
but more distant and colder ...
my gondola glides
through the Grand Canal
in a virus-free dream

It is what it is

"When you believe in God, he will not give you more than you can handle; when infected with doubt during a time of crisis, you should respond by seeking the right answer to your question," the pastor said in a firm, yet affectionate tone as he accompanied me to the parking lot. In the corner of my mind, God's words lingered, "Therefore do not worry about tomorrow, for tomorrow will worry about itself. Each day has enough trouble of its own."

The following day, in the shadow of this one-hundred-year-old church, I pause to wonder, “Am I as strong in the eyes of God and his mighty power as a true believer?" The path to the church entrance seems long ... and narrow. The pastor starts preaching at this much-anticipated Sunday Service.

spiritual nearing
versus social distancing ...
sitting alone
on a long wooden bench
further away from myself

just like the flu ...
all eyes on the last pack
of toilet paper

social distancing ...
further and further away
from the President

Relax, it all will pass ...
this infectious silence
of the American Dream Mall

we're doing great ...
in my virus-free dream
the White House locked down

Note: American Dream is a retail and entertainment complex in the Meadowlands Sports Complex in East Rutherford,New Jersey, United States, that has over 450 stores and 33ooo parking spaces.

Ninth Entry: for Rick Grimes who cries out in a storm, "Rest in peace. Now get up. and go to war," The Walking Dead, Season 5.

Chinese virus ...
in my infectious dream
the White House
toppled by the army
of the walking dead

moonlight
floods empty alleys ...
one Italian
singing to another
on Juliet balconies

shades of gray
seen from my attic window
shelter in place


Fourteenth Entry: written in response to "No Canadian" Trending on Twitter

Fifteenth Entry: a profile of Covidiots with guns


Sixteenth Entry, written in response to this alarming new: Asian-Americans are rushing to buy guns as they observe an increased number of Asians being targeted by coronavirus-related attacks

Chinese virus ...
long wait at the iron door
of a gun store
an Asian-looking man sighs,
I just want some peace of mind


Eighteenth Entry, written in response to Pandemic could lead to home-cooking revival

flattening the curve
the news host almost yells --
head down, I look
at my pot belly
and take one bite of cake

quarantined
for another two weeks...
grocery run
for a brand new copy
of Home Cooking for Dummies

the White House
encircled by the Great Wall
of N95 masks --
the face of a tired nurse staring
into the camera ... at Death


Twenty-Second Entry, written on the 100th day of the first Covid19 case reported to the WHO

pandas mate
after ten years of trying...
the distance
between my wife and me
shrinks to the space between laptops

Note: "Tsingtao Brewery Co. Ltd. is China's second largest brewery, with about 15% of domestic market share. It was founded in 1903 by German settlers in Qingdao, Shandong province... The Tsingtao brand is sold in 62 countries and regions around the world, and accounts for more than 50% of China's beer exports."

staycation for the nation
I whisper to my dog
... and myself

morning chill
the sound of an empty
St. Peter's Square

sunlight
through stained glass windows ...
tomorrow
will worry about itself
echoing in an empty church

FYI: Therefore do not worry about tomorrow, for tomorrow will worry about itself. Each day has enough trouble of its own. Matthew 6:34

the priest recites
Therefore do not worry
about tomorrow...
photos of the congregation
attached to wooden benches

drive-thru confession
Father I have sinned ...
sinned against myself

wisps of snow
my old dog and I
six feet apart

crisis fundraising:
in the breezy sunshine
step by step
a WWII vet walking
100 laps of his garden

Thirty-Second Entry, a sequel to the thirty-first entry, written for Captain Tom Moore who raises £15m for NHS as he completes garden walk

END the LOCKDOWN ...
protesters choke the streets
with their cars
blocking ambulances
from reaching the hospital


Note: This tanka could be read as a sequel to seventeenth entry, April Fools' Day, written in response to the March 29 tweet, "President Trump is a ratings hit." posted by CovidiotInChief, Donald Trump


Thirty-Fourth Entry, a sequel to the thirty-third entry

in breezy moonlight
Montrealers on balconies
burst into song:
Come over to the window
my little darling

quarantine
just still-time spent
with this attic...
I murmur to myself
and empty streets below

Thirty-Seventh Entry, a sequel to the thirty-sixth entry

quarantined
for weeks in an attic
of shadows ...
I open the window
to morning birdsong


Thirty-Eighth Entry, written in response to CTV News on April 24: A National Disgrace: 1475 deaths in long-term care homes and nursing homes are made up of 67% of the total number of coronavirus deaths in Canada

Note: This haiku is a sequel to the tenth entry:


Thirty-Ninth Entry, a sequel to the thirty-eighth entry

an old woman
in the rain-streaked window --
new death toll


Fortieth Entry, written in response to Pawning During A Pandemic

lockdown lifted ...
a lineup stretches
10 blocks
from EZ Pawn
in the morning chill

Note: This tanka is a sequel to the thirty-third entry:

END the LOCKDOWN ...
protesters choke the streets
with their cars
blocking ambulances
from reaching the hospital

balcony concer
my dog and I sing along
to LeanOnMe


Forty-Third Entry, written on the day of the US hitting one million confirmed cases and for Dr. Lorna M. Breen, medical director of the emergency department at New York-Presbyterian Allen Hospital, who committed suicide last Sunday

onslaught of patients
wheeled into the ER
in the fray
She tried to do her job
and it killed her...

Note: This tanka is a sequel to the thirty-ninth entry

an old woman
in the rain-streaked window --
new death toll 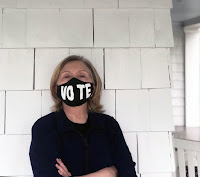 this scent
of breezy sunshine ...
Hillary Clinton
wears a black mask
with VOTE in white letters

FYI: I’ve got the must-have accessory for spring. I’m wearing a mask (and voting!) for my country, my community, and my grandchildren. -- Hillary Clinton, The Hill, May 2

We're all in this together

kill the virus
not our business ...
the city hall
encircled
by chairs and tables

end the lockdown ...
alone with my dog
for weeks
now I open the window
to taste the noise

lockdown lifted
still no handshake, no hug, no kiss
fading into the dark

at the briefing
the premier yells out
FU Covid ...
the lockdown lifted
under spring sunshine

FYI: The P.E.I. premier, who threw his f-bomb at the invisible enemy, Covid19, three days ago, now becomes a folk hero. And these FU Covid T-shorts are the hottest commodities on this tiny island. The premier's "cheap shot" is good for business.

at a Buddhist temple
bloodily defaced
with a sledgehammer ...
gathering dark in Montreal

FYI: Sixty per cent of all Canadian deaths linked to COVID-19 have occurred in Quebec, including more than one-third in Montreal alone.

business as usual
giant Stars-and-Stripes flapping
over a salon

FYI: The epicenter of the coronavirus outbreak in the U.S. is in New York, and is particularly concentrated in the New York City region. And these is a continuing series of violations of Covid19 restrictions across the US.


for Søren Kierkegaard who called his melancholy “the most faithful mistress I have known."

death toll rising...
in illness and in fear
alone
with my drunken shadow
apart together

in dim light
my quarantined mind races
back and forth
between the old and new normal:
this world of masked faces

FYI: The epicenter of the coronavirus outbreak in the U.S. is in New York, and is particularly concentrated in the New York City region.

Back to School
a boy washes his hands
over and over ...

sleeping while Black
an EMT shot dead
by police

FYI:  Yahoo! News, May 13: Sleeping while black: Family seeks justice for Breonna Taylor, killed in her bedroom by police

To Justin Trudeau who addressed the House of Commons on saving the elderly from coronavirus on April 11, saying, They fought for us all those years ago. And today we fight for them. We will show ourselves to be worthy of this magnificent country they built.

at the briefing
the photogenic PM's mouth
opens and closes ...
a nursing home silhouetted
against the sunset sky

forty more deaths
slides across the bottom
of the screen ...
a nurse's voice falters,
this elder genocide

gathering dark
she touches her father's face
behind the glass door

stay at home
no pot and smokes sold here...
this small Reserve
encircled by red dots
on the Covid-19 map

FYI: Haida are a nation and ethnic group native to Haida Gwaii, an archipelago located off the west coast of Canada.

business as usual  :-)
in the cafe dressed-up dummies
sit beside me

Songs of Comfort
echoing against this wall
of ghostly shadows ...
note by note my heart reopens
to this infected world